You don’t need to turn up to any gig anywhere. Just login online from home while in your bed/cooking dinner whatever and you will hear us loud and clear.

It was our first ever radio show and how exciting it was!! We some songs and gave out a bunch of small interviews as well. And we had some of our favourite artists playing on the radio, ranging from The Killers, to Metallica and Lady Ga Ga.

Hellfest 2011 is an inspiration

Going to big gigs and concerts is always really refreshing and also quite inspirational for those in bands. You get to hear some top quality bands with great sounds and you also see how it is done “professionally”. Not only that but you get to experience first hand why and how people get connected to certain types of music and bands. Plus you also learn how real bands communicate with fans while they are on stage and how they make their show an experience to remember.

And in a festival situation it is more likely that the band are playing to more people who are not their fans than their actual fans. It is a golden opportunity for those bands to capitalise on this attention and this is how presumably how these bands increase their following.

Rocking out at Hellfest 2011

So as singer Atul went to Hellfest 2011 with another musician friend, we were truly in awe and inspired by those who do it for a living. We’ve learnt the importance of having a great sound on stage and making it a truly remarkable live event. We also learnt that you can’t impress *everyone* at the show but you make the most of the people you do in fact leave a mark on. And that it is pretty cool to travel outside your own country and interact with a different culture altogether.

And most of all…..you just have to have fun, isn’t that why we got into all of this in the first place, right? So here’s a video clip filmed by us of Mr. Big’s cover of The Who Song “Baba O’ Reily” at Hellfest 2011. Enjoy 🙂

The year was 2007, and we got our first ever video produced and uploaded, and man it was fun. Little did we realise how important it was to have videos up on YouTube at that time and YouTube became bigger and bigger through the following years.

And then we waited and waited some more for the other videos to be produced, to find a video producer, or to possibly re-record songs, or to wait till the new band member arrives so that we can include him in the video too.

We’ve produced something very simple for “The Score”, the first song that we ever wrote and the set ender on every night. It is a great intense piece of music and deserves it’s space on YouTube. So here it is…a video for The Score, it is a great collection of live shots through the years of us playing live.

Press play, turn it up loud and let it take you to the moody and dark depths that is the manic show…

The story of Crap Day

The lines to the infamous chorus of what has now become the most popular DonkeyBox tune “Crap Day”. It is the only song that is a slight diversion from our edgy, otherwise darker melodic rock. But beyond a shadow of a doubt it is also the song that will instantly be picked up by newbies in the audience. The song is the story of how you can wake up on the wrong side of the bed and then no matter how hard you try, you are bound to have a bad day!

The song came about in the summer of 2003. Crap Day was originally just a jam. The bandmates had all got into the practice room and were all late. We all had tales to tell why were were late, mostly on how things, trains and eveything conspired against us. Strings broke in rehersal, Matt’s guitar strap came undone (he might have been hungover knowing him those days!) and it was all going unusually and horribly badly for us that day!

Those days we were learning how to play a song called “Amphetamine”, Atul played the chords to the chorus to that song, Mike started drumming, the others joined in and we starting shouting out, “It’s been a Crap Day, Crap Day, Crap Day”. It was a bit of fun and made things a bit lighthearted for us all. We were musicians so we just expressed ourselves. And that was the end of that jam, or was it?

Having got the jam on a taperecorder and listening to it later, the jam struck a chord, so Atul sat down and worked on some lyrics. The original demo sent to the band sounded fairly downbeat with it’s slow tempo and extra lyrics (that are no longer there in the song), but the message and lyrics of the song impressed the bandmates. Then came the hard musical task of making it a full song, namely joining the verse and pre-chorus to the chorus was proving tricky. A few jams later, we came up with the gem in it’s form today.

On top of that since the song was written over 7 years ago, there have been many line-ups that have played that song. Each line-up has added it’s own finesse to the song and we can practically always play the song blindfolded and near studio perfect live!

The song goes down so well with everyone live, people dance to it, sing along to it, and despite having performed it for hunderds of people in total over 7 years, we can never get fed up of it. The emotion of the song still remains the same.

Fancy hearing one of our earliest jams of the song? Drop a comment here and let us know.

Well, this time it didn’t take us 4 whole months to get back on the road, it only took us 2 and a half instead! This sort of irregular gig appearances is totally abysmal given our history of regular gigging.

We were unlucky in some ways because of an earlier gig that was cancelled in September. Nonetheless we were back on the gig scene much much sooner than last time.

Our third ONLY gig of 2010 was easily the best gig we have played this year and indeed in some time. We were a bit nervous no doubt it. Some bad comments about the pub in an online guide to pubs prevented some of our friends coming along, and after sound check it was looking like a sort of empty venue we were going to play at.

But this was not going to make any difference to us, we were going to give it a massive performance anyway.

But, lo and behold suddenly loads of Atul’s friends turned up and other people turned up too. The place was packed and there was even a couple dancing in front of the stage as we opened up with our new set opener “The Moment”.

As we got photographed while we played, we churned out our set confidently; from The Moment, Deep Blue Sea, Crap Day, Out of Power, Pointless, Terminator 2 theme and then our finale that never can disappoint…. The Score.

The sound on the night was totally amazing as well, with crystal clear clarity in guitars, bass and vocals we have never sounded so gorgeously clean and accessible. Thanks a lot to Mark Williams, the sound dude on the night.

Our next gig is in just over 2 months time in Rochdale, we are gigging more and more often now and this is an amazing thing. Love you friends 🙂

We are absolutely delighted to announce that we have appeared on an online magazine called Clink Music Magazine; Chaos in Sound. We have been featured as one of the new up and coming bands in their Introducing section.

The ballad ‘Deep Blue Sea’ goes from ethereal to heavy rock on the course of its 5 minutes, ‘The Moment’ has a kick of Spanish guitar all lead by an amazing bass line.

Another great song is ‘Pointless’, with a simple and catchy rhythm that gives space to the lyrics “These complications that arise they’re just pointless/You can’t do with do or die it’s just pointless”.

..are some of the quotes from the article itself.

Many thanks to Chaos in Sound for getting us out there! 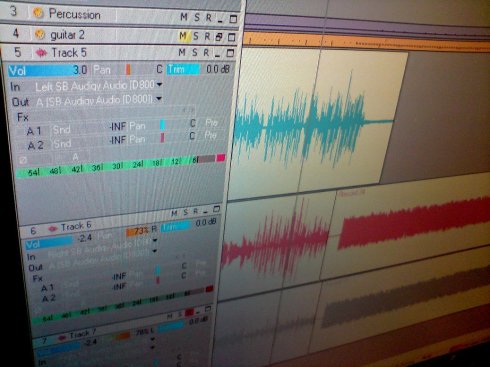 Wavy lines is what it is all about

Well it has been a while since we were gigging last and all does seem a bit quiet at DonkeyBox land..but that is not the case…we love the LOUD life.

Some of our best songs still have never been recorded in a nice, clean, crisp sound that you can just listen to and make your own.

…to name just a few.

So we’re recording some very basic demo recordings at the moment (pun intended). These demo recordings will be self produced to help us figure out the best and most gorgeous individual instrument parts that we can include in our full production recordings.

When we have those figured out we will commence with the actual recording process with our producer and recording engineers.

It is a really cool, creative process and we’re picking up momentum. It is so good to be re-discovering the beauty of our songs in a different more processed format.

The road ends for 2010 SxSW festival

SXSW Music received and reviewed over 11,000 submissions from bands all over the world….SXSW will be unable to offer DonkeyBox a showcase this year

And with that official notification our goal of playing the almighty South by southwest in Austin for 2010 ends.

It was a bit of a long shot for us and we are glad we went for it. The good thing is that now we have access to a database of rock festivals around the world where we can play.

And the best thing we got from this application was that it gave us the confidence to tour outside London, and we did that last December.

So yeah rejection sure hurts…but we learn and then move on from it.

With potential festival slots in Spain, Sweden, UK, Canada, China and practically anywhere we want to play, we now have so many possibilities opened up to us.

See you at a venue near you very soon!

We are delighted to announce that our music is now available for free on yet another source online. This is the up and coming and very popular Spotify.

We are thankful to our digital distributors CD Baby for getting us into Spotify. Not every artist can directly upload to Spotify and you need a distributor first to get on there.

Thankfully our music has been on digital distribution for quite some time and finally after many months we have been added to the Spotify catalogue.

What do DragonForce and DonkeyBox have in common? 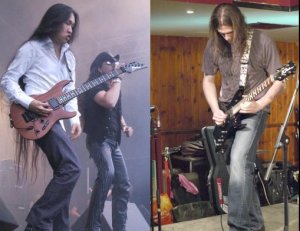 The shred machines of DragonForce and DonkeyBox

Besides the weird names which involve an animal and the even weirder reason for name capitalisation, these two bands have more in common than you would think!

Yes they are both rock bands, yes they are loud..but the bands have almost crossed paths once on the same stage believe it or not.

It was the summer of 2001 when lead guitarist and drummer from DonkeyBox popped into the Imperial College Jemfest and on that small stage there was this guitarist dude who was playing some mildmelting guitar solos on his Ibanez guitar.

It was all about the Ibanez guitars that little event and those guys at the end seemed the perfect headline act.

Fast forward about 3 years and omg these guys have changed name slightly to DragonForce and a force to be reckoned with, they have made it in mainstream rock music!

The small world of rock n roll that we live in.